ZeroTrace: New adsorption materials and regeneration processes for the elimination of trace substances in municipal and industrial wastewater treatment plants

In Germany, trace substances can be found in almost all waste waters and water bodies. In some cases, the sewage treatment plants use activated carbon which binds pollutants to the surface. Activated carbon is mainly produced from hard coal - a non-renewable raw material. The consortium develops activated carbons from regenerative materials, which are available in large quantities at low cost. Instead of reactivating the loaded activated carbon in a central regeneration plant with great logistical effort, ZeroTrace is developing a process for on-site regeneration. The entire process is implemented in the plant and demonstrated for different types of wastewater. A material flow analysis, Delphi studies and a multi-criteria analysis accompany the project.

ZeroTrace aims to establish a new process of activated carbon for waste water purification and to develop activated carbons,which are available in large quantities at low cost (-> industrial and municipal applications), which can be efficiently regenerated locally (-> resource conservation) and remove as many types of trace substances as possible (->broad-spectrum effectiveness). A key innovation is the development of stable composite activated carbons with increased electrical conductivity, which are to be implemented in a new electrical regeneration process (EFSA Electric Field Swing Adsorption) on a laboratory and pilot scale.

The consortium's approach comprises the complete value-added chain, starting with the development of a composite of activated carbon from a base material and an electrically conductive material. The modified activated carbon is manufactured and tested in simple laboratory tests to determine its applicability for the elimination of certain indicator trace elements. A new regeneration process based on EFSA, which has so far only been used in gas adsorption, will be implemented and investigated on a laboratory scale for subsequent piloting. The adsorption capacity of the prioritized activated carbon is checked on an extended laboratory scale before pilot phases with municipal and industrial waste water follow. The new process of activated carbon will be evaluated in the light of socio-economic and ecological innovation drivers and barriers in order to ensure targeted and sustainable development.

Press release on the start of the project "ZeroTrace" (in German) 8. März 2017 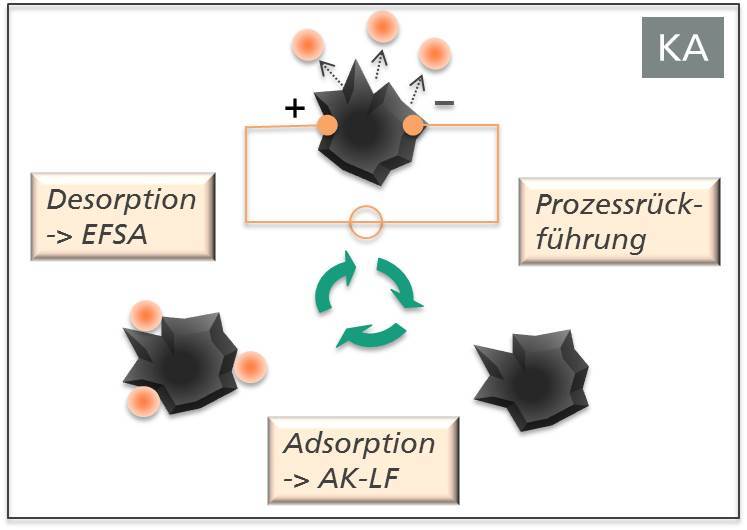